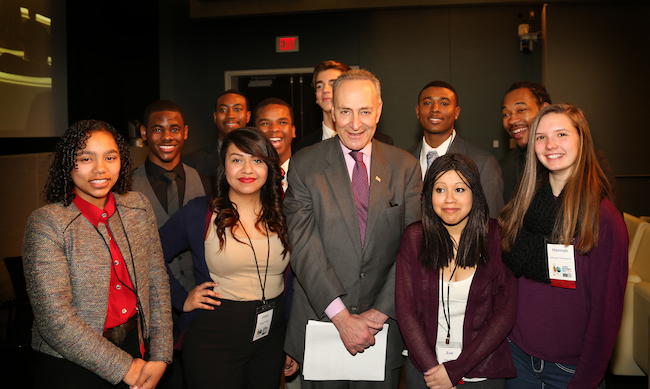 It was a great honor that ConnectSafely.org, the non-profit Internet Safety organization where I serve as co-director, was selected to host the first official U.S. Safer Internet Day.  The day, which has been celebrated in Europe for the past 11 years, saw events across the world including a celebration in Washington D.C. Tuesday where Senator Chuck Schumer (D-NY) spoke along with a panel of high school student leaders and another panel of social media executives.

I moderated the event along with ConnectSafely.org co-director Anne Collier.

On a panel moderated by 17 year-old Aidan McDaniel of West Virginia, executives from Facebook (Instagram), Google (YouTube), Microsoft (Xbox Live), Twitter and Yahoo (Tumblr) talked about the way their companies deal with abuse reports, child pornography, bullying and other problems. But they all agreed that the overwhelming majority of their users are good online citizens.

Just as cities and towns have to spend resources dealing with a small number of  trouble-makers, social media companies need to police their services so  users have mostly good experiences. All of these companies maintain close ties with law enforcement, which helps them deal with the most egregious problems. But in most cases when problems come up, they’re handled internally by warning the offending user or – if necessary – kicking them off the service.

Facebook now enlists its users to help each other with what they call “social reporting.” Instead of Facebook staff intervening in what are often relationship issues, they offer a tool that helps users work it out among themselves or seek help from a trusted third party.  The program, which is carried out with help from the Center for Emotional Intelligence at Yale, has been very effective, according to its developer, Facebook engineering Arturo Bejar. “We found when we were looking at reports that there were a lot of things getting reported that were really misunderstandings or disagreements among people who use the site,” he told me in an interview shortly after the company launched the program.

While some of the day focused on problems encountered online, much of the discussion at the U.S. Safer Internet Day celebration focused on the positive things people are doing with connected technology. An important part of ConnectSafely’s program this year is the ‘One Good Thing” campaign that encourages people around the country to post positive short videos or blog posts positive things they have done or know about, using the Internet or mobile devices. The list ranges from high school kids using Facebook to promote a “Save the Pandas” campaign to a college student who spoke about the  online support given to him and friends  after the death of a fellow student. Others talk about their school’s “compliments page” or how they have gone online to support fellow students who have been cyberbullied. You can view and read these great things (and add your own) at OneGoodThing.us.

The youth student panel, moderated by Yahoo Tech “Modern Family” columnist Dan Tynan, included students from Washington DC, Chicago and Detroit. The young panelists talked about ways students can be “upstanders” rather than bystanders when someone they know is bullied online or off.  And, the kids pointed out that bullying is not as common as some adults may think. Most of their classmates treat each other with respect at school and online.

The final speaker at the Washington event was Senator Schumer, who quipped, “While I’ve probably never snapchatted with Senator Rand Paul, I do understand the great potential of the Internet.”

He said that it is now a very important part of New York’s economy, both in cities (New York city is giving Silicon Valley a run for its money) and in rural areas. He pointed out that it increases political engagement of youth and has resulted in far more young people wanting to work for elected officials. He also touched on the Internet’s role in education and telemedicine and reminded the audience that it’s “important for every family to talk about Internet safety and rules in their household.”