This post first appeared in the San Jose Mercury News

Thanks in part to whistle-blower Edward Snowden, the former contractor with the National Security Agency, there’s increased interest in a new crop of services, apps and phones designed to protect our personal data from prying eyes, including those of government agencies. 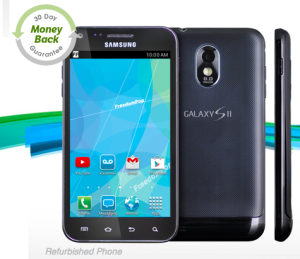 FreedomPhone is a Galaxy S2 with special software and services

FreedomPop’s new Privacy Phone has actually been nicknamed the “Snowden phone,” according to CNet News. The phone is a Samsung Galaxy S2 outfitted with 128-bit encryption that scrambles your voice calls and text messages. That level of encryption, according to the company, is the same as used by banks and government agencies to protect their data.

In addition to protecting your communications, the phone enables anonymous Internet browsing, prevents marketers from tracking your browsing, bypasses any restrictions on sites you can visit and, according to the company, “Defends against data monitoring and eavesdropping from 3rd parties.”

And you can even buy the phone secretly using Bitcoin — the alterative “currency” that’s not issued by any government or transferred through banks.

The phone costs $189 and comes with three months of free unlimited voice and text, and 500 MB of data. After that, the cost is $10 a month, which is a great price for any cellphone. 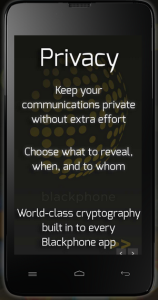 Another, albeit more expensive, option is Blackphone from Silent Circle. The company is led by Phil Zimmerman, who is the creator of Pretty Good Privacy, the most widely used email encryption software. During the 1990s, Zimmerman was investigated for allegedly violating the Arms Export Control Act because of U.S. government concerns that his software made it too easy for our enemies to hide their tracks. But that software also made it possible for citizens around the world to secure their data from prying eyes, including corporate spies and oppressive governments.

The Blackphone, which costs $629, plus the cost of service, consists of an unlocked smartphone with a 4.7-inch display. The operating system, called PrivateOS is actually an enhanced version of Android with lots of extra security features, including anonymous search, “smart disabling” of Wi-Fi except for trusted hotspots, “fine grain control” over app permissions and encrypted calls, text messaging and video chat.

While FreedomPop and Silent Circle use software and encrypted services to protect user privacy, Boeing — the giant aircraft maker — is offering the Boeing Black Smartphone, a mobile phone that also has hardware protection. Aimed at government agencies and contractors, the Boeing Black smartphone is also based on Android and, in addition to software protections, is tamper proof to avoid the possibility of someone getting inside to plant a tracking or listening device or to cipher data from the phone’s memory. The phone, according to Reuters, is slightly larger than an iPhone and uses dual SIM cards. It also supports satellite communications and, most important, will self-destruct if anyone tries to tamper with it.

Pricing hasn’t been announced, but this is not a phone for everyone. Ironically, the very agencies that a lot of people want to hide from — like the NSA — are likely to be among its customers, along with military personnel and others who deal with highly classified information. Had this phone been around when he took office, President Barack Obama might have been a potential customer. He was famously wedded to his BlackBerry when he ran for office in 2008 and since becoming president has been using a secure smartphone.

You don’t have to be a criminal or worried about the NSA to be in the market for phones like these. On its website, Blackphone is billed as a device for those who want to make their own choices “and regain the ability to keep your life private.” Privacy is a right even for people who have nothing to hide and, while probably relatively small, there is a market for people who are willing to go to extraordinary lengths to protect their privacy.

There is also an international market for these devices, especially now that it’s known that our government has spied on cellphone communications of foreign leaders, including German Chancellor Angela Merkel.

To me, the big question is whether privacy can ever become mainstream. And by privacy I don’t just mean protection from the NSA, criminals or corporate spies, but protection from tracking, targeted ads and profilers who make it their business to know as much as possible about our business so they cannot only sell things to us but sell us (or our identities) to marketing companies.

Some of the very companies that are loudly protesting NSA’s access to users’ personal information are themselves profiting by rifling through and warehousing that very same information. True, companies like Google and Facebook don’t have the power to deny our freedom or force us to testify as do governments, but they do have the ability to sell our information to the highest bidder or use it to bombard us with highly personal advertising. It’s time for industry, government and — most important — an enlightened citizenry to reign in some of that “big data” that’s being collected about all of us to make sure that we, not big institutions with .gov or .com after their names, are in control of our own information.