Let’s not use 21st century technology with 19th century pedagogy

By Larry Magid
In a talk at the National PTA Conference in Charlotte, NC, Thomas Murray, State and District Digital Learning Policy and Advocacy Director for Alliance for Education, reminded me of what’s been bothering me for years. “We’re using 21st century tools in 20th century learning environments.” I’d go even further than Murray. As far as I’m concerned too many of our teachers are using 21st century technology with 19th century pedagogy with teaching styles and classroom management techniques that haven’t changed much since my grandparents were in school.
To reinforce his point, Murray showed pictures of typical secondary school classrooms taken in 1915 and 2015 and, in both cases, student desks were lined up in rows with the teacher at the front of the room. He also said that many schools still employ “top-down one size fits all” teaching methods where learning is based on how many hours kids spend in class rather than what skills and insights they acquire. 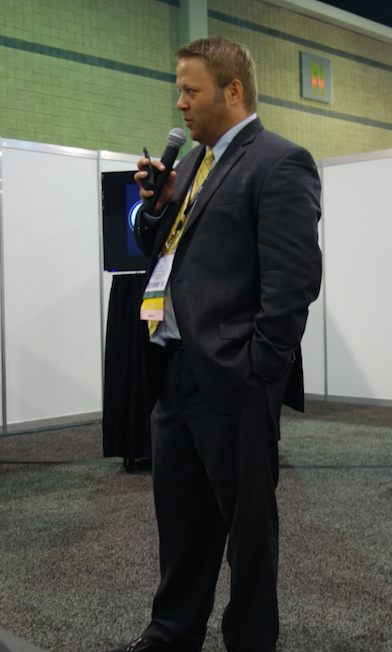 A few years ago I attended a session at an International Society for Technology in Education (ISTE) conference where a marketing person from a smart board company demonstrated how her company’s technologically advanced product could be used to enhance a lecture on geography. Even though this was well into the 21st century, it felt like the lectures I grew up with, only instead of a blackboard and an overhead slide projector, the instructor was using an electronic aid to drill facts into the heads of students.
Need to be student centered
“How do we go from a teacher-centric environment to a student centered one that is personalized and hands-on,” Murray asked during his PTA talk. He pointed out that today’s students need higher level reasoning and research skills, not “drill and kill.”
Skills for now and the future
Murray is the father of a young student who, he said, will be part of the graduating class of 2028. That’s a frightening thought to think that someone who will enter college or the workforce in the second quarter of the 21st century is at risk of spending a good part of her school career sitting in a classroom being trained to take tests rather than knowing how to come up with new ideas and critically solve problems that may not yet even exist. Today’s world requires different skills than the world I grew up in. For one thing, knowledge itself is a commodity. If I want to know the capital of Nebraska, I can look it up in an instant. If students today need to know what year World War I started, they can pick  up their phone and ask Siri or Google Now. But the web can’t tell them what it is that we need to take away from our understanding of that war or any other event. That requires research, thought and critical thinking skills — the very things we should be teaching in school. And by the way, they’re likely to learn more if they collaborate with other students. Some call that cheating.
Tech safety requires thinking not blocking
Even personal safety — whether online or in the physical world — requires more than just rote memory. During the Q&A period of Murray’s talk, a teacher said that her school’s filters block YouTube, Google and many other useful resources along with pornography and other sites that filters should block. Murray agreed that we need a more sane approach to filtering but — from my perspective — what we really need is to fine tune the filter between the student’s ears. Sure you can block some inappropriate sites just like you can put fences around some swimming pools. But to really prevent drowning you need to teach kids to swim. Blocking sites or apps is like playing whack-a-mole. Even if you try,  you can’t block them all and there is the risk that you wind up blocking useful tools like search engines and video sites like YouTube where there is a lot of great material along with some not-so-appropriate videos. Besides, kids will be able to access those sites and apps elsewhere and even at school if they’re carrying their own smartphone as many are. Finally, kids grow up and we can’t control them forever. We need to teach self-control, self-reliance and resilience
Future Ready Pledge
Alliance for Education is supporting the U.S. Department of Education’s Future Ready Pledge, which has so-far been signed by nearly 2,000 school superintendents who have promised to “work with educators, families, and community members to make all schools in their districts Future Ready.” That includes promoting personalized digital learning.
The pledge is a great idea in that it requires school leaders to think about what it means to transform their schools, but signing a pledge isn’t the same as changing a school’s climate or modifying the culture of learning. As a nation we need to start thinking about what it really means to be a productive member of 21st century society in an age where information is an essentially free commodity.
A shining example

Kerry Gallagher was, until very recently, a high school history teacher who, never gives tests, never lectures and encourages her students to use innovative apps and social media tools to create and share their projects. In a A Guide to Creating a Collaborative Learning Environment on edSurge, Gallgher said:

Students are engaged in collaborative learning when working in small groups of 3-6 to solve a problem or answer a question. Together they develop theories, test their ideas, and creating evidence of their learning. Since no learner is working alone, they can benefit from the varying creative and skill-based strengths of the collective group in order to develop their own individual understandings.

Gallagher isn’t alone. There are a growing number of teachers who are using tech not to deliver the same old top-down learning but to engage and empower their students.