Talking with kids about cyberbullying after President Trump's tweets

By Larry Magid
ConnectSafely.org, the internet safety organization I co-founded, does not take political stances, but we do stand against cyberbullying, which means we must speak out against it, even when it comes from the President of the United States.
On Thursday, President Donald Trump, once again, turned to social media to demean and insult others. This time going after MSNBC morning talkshow hosts Mika Brzezinski and Joe Scarborough. To be sure, Brzezinski and Scarborough have been hard on President Trump but, regardless of whether they have ever crossed any lines on TV, insults like this coming from the President of the United States or anyone else are inappropriate, especially in a public forum like social media. And, as Mr. Trump should know, our children are listening. Even if they don’t follow him on Twitter, they are aware of the negative comments he has made very often about individuals and entire groups of people including Muslims, immigrants and journalists.

A Parents Guide to Cyberbullying

Obviously, we can’t prevent the President from behaving as he does, but other adults can be good role models and can speak with their children about engaging in civil online behavior, despite the negative role models from some adults.
Advice for Parents

You can find a lot of advice on this subject from ConnectSafely.org’s A Parents’ Guide to Cyberbullying and we have even more great advice from Kerry Gallagher, ConnectSafely’s director of K-12 Education and an educator at St. Johns Prep in Danvers, Mass. Kerry spoke on KCBS Radio in San Francisco and participated in my one-minute CBS News Tech Talk segment on Thursday, June 29, 2017.
Click below for Kerry Gallagher interview on KCBS San Francisco. 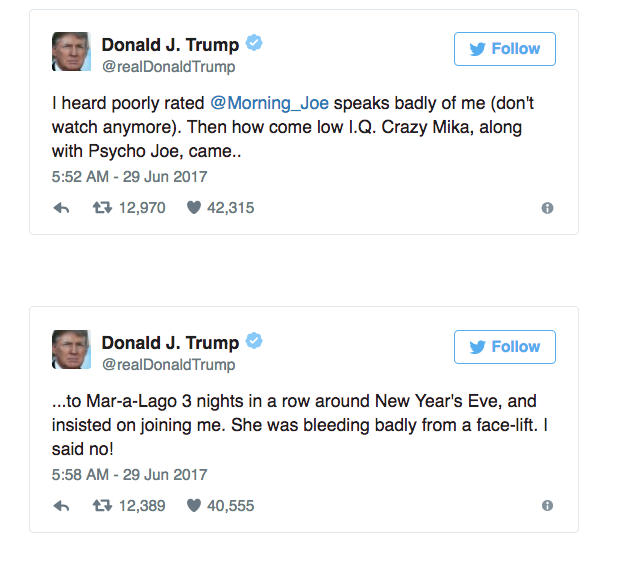