The Apple iPad is a phenomenal success not only among consumers and business users but in schools as well. It turns out to be an incredibly popular device for children  who take to its user interface immediately and intuitively.  It’s no wonder that lots of iPads wind up in the hands of children.

But there is a problem. When it comes to the ability for parents and educators to control what their kids can do using Apple’s Safari browser, there are only two choices: On and Off.  The adult in charge can disable access to Apple’s Safari browser but there is no built-in way to give kids access to appropriate content and keep them away from porn.  What’s more, there can only be one account associated with an iPad (or an iPhone too) so, unlike PCs and Macs that allow for multiple users accounts, if you share an iPad, every user — whether 4 or 40 —  has access to the same software and same rules on engagement.

Because Apple does make it possible to disable Safari, it’s possible to make Olly the only available browser. Parents can always turn Safari back on when they’re using the iPad but after using Olly for awhile, I think it makes more sense for parents to simply use Olly with safe browsing turned off.

Olly is very easy to download, install and use. Parents assign themselves a four digit numeric passcode that enables them to not only turn Olly’s safe browsing mode on or off, but to add additional sites to the filter list including Badoo, BlogSpot, Digg, FaceBook and Twitter, however By default these sites are not blocked, which is smart,since there are plenty of good reasons why kids should have access to social networking sites. 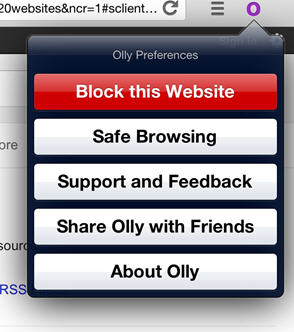 Once it’s configured, every web request is passed through MetaCert’s filtering system, which currently labels 638 million sites.  If the site isn’t on the list, you get to it instantly. If it is, you see a page telling you it’s blocked.

Olly also allows parents to add pages to be blocked and to report if a site should be blocked or unblocked.