Common Sense Media just published a report that paints a mostly positive picture of social media’s impact on teens’ social and emotional well-being. Social Media, Social Life: How Teens View Their Digital Lives (PDF) points out that “Many more teens report a positive impact of social media use on their emotional well-being than a negative one,” and pretty much debunks the myth about “Facebook depression” with the conclusion that “Very few teens think that using their social network site makes them more depressed.”

Among the 75% of 13- to 17-year-olds with a social
networking profile, percent who say social networking
makes them feel more or less: (Source: Common Sense Media)

The report is based on an online survey of 1,030 13-to 17 year-olds conducted between February and March of this year.

Though use of social networking seems to help a lot more kids than it hurts, when it comes to social-emotional well-being, most kids (83%) say that social networking doesn’t make much of a difference to whether or not they feel depressed or better or worse about themselves (81%).

Sharp contrast to the naysayers

The report stands in sharp contrast to some naysayers who worry that Facebook might cause social and emotional distress, depression or social isolation. In  fact, more than half (52%) said that “social media users say using such media has mainly helped their relationships with friends, compared to just 4% who say social media use has mainly hurt their relationships.”

And, despite what some pundits have written, social media hasn’t diminished teens’ desire to maintain face-to-face relationships. Just under half (49%) of teens said that their favorite way to communicate with their friends is in person, followed by texting (33%) with social networking (7%) just slightly ahead of talking on the phone (4%). Still, there are some kids (43%) who agreed that they sometimes wish they could “unplug.”  The survey reported that “Most teens feel that, on balance, using social media has  helped rather than hurt their relationships. About half of all teens (54%) say social networking has helped them feel more connected with family and friends (2% say it’s made them feel less connected, and the rest say it hasn’t made much difference one way or the other).” 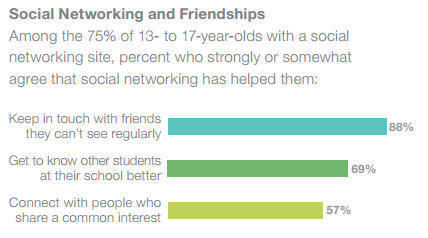 There were some findings that raise the caution flag. For example, 44% of teens say that “they often or sometimes encounter sexist (44%), homophobic (43%) or racist (43%) comments online and 24% they they “often” encounter some type of derogatory speech.  But it’s important to put this in context. Just because someone finds negative speech online doesn’t mean that most or even a substantial portion of people are posting it. A single negative post could be seen by a great number of people. Besides, there is no evidence from this survey that online use encourages negative speech, it simply reflects it as it reflects all good and bad aspects of life.

The study broke down responses between the roughly 90% of teens who are “in good emotional shape” and the 10% who fell into the category of “less happy teens.” Among those teens who are “less happy,” 50% report that social networking makes them more outgoing compared to 17% of the “happiest teens.”  Less happy teens are also more likely to feel more popular (34% vs 15%), less shy (49% vs.21%) but at the same time  these less happy teens are also more likely to report negative feelings such as “worse about myself (15% vs. 1%) and more depressed (18% vs. <.5%). These same less happy teens also wish their parents would spend less time on their and other devices (42% vs 17% of happier teens).

One size doesn’t fit all

The survey doesn’t attempt to explain why less happy teens have both positive and negative emotional reactions that differ from happier ones but it does reinforce the fact that how people respond to social media is very individual and personal which makes it very hard to generalize and even harder come up with a “one-size-fits-all” type of explanation or solution for any perceived problems.

The report illustrates that social media, while mostly positive, can have some negative impacts on some people, but that’s true for anything in life including watching movies, reading books, eating certain foods, playing sports or even going to school. We live in an increasingly complex world were generalizations and sound bites — while increasingly common — are increasingly irrelevant. That’s why it’s so important for parents as well as teachers and others who look after kids to consider the needs of each child individually. While it’s reassuring to know that the vast majority of kids are doing really well on social media, it’s also important that  we take extra time to support those kids who may be struggling.