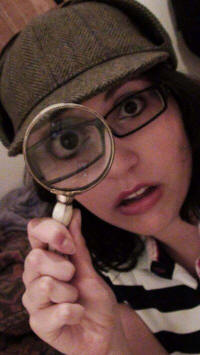 Is this the new parenting? Creative Commons image by Sevillana

I got a call recently from a woman who works for a company that makes an app designed to “keep kids safe” by enabling parents to monitor their texts and social media activities. The pitch included some dire statistics such as “70% of kids are cyberbullied” and — like other companies that make parental-control software — I was also told that it helps protect kids from strangers who would do them harm.

She even told me that she uses the product with her 17-year-old son so she can be his “admin,” and help him if things go wrong. I so wish I could have interviewed her son. It’s hard to image a 17 year-old boy actually wanting his mom to monitor his online activities even though this particular product — to its credit — doesn’t provide parents with a complete transcript of everything the kid does but just notifies them in the event something inappropriate appears to occur.

As pitches from parental-control companies go it was pretty mild. I’ve seen others spout frightening statistics that would scare the heck out of any parent, with phony data about online sexual predators or the looming threat of bullying and cyberbullying-induced suicide. Then there’s the sexting panic and — worse —  “sextortion” where someone threatens to send around naked pictures of your child unless he or she agrees to have sex with them.

And it’s not just companies. Some non-profit organizations, government agencies, politicians and police departments have also exaggerated problems, presumably to attract media attention or possibly help justify their budgets. One non-profit organization has repeatedly claimed that 85% of teens have been cyberbullied — a number that flies in the face of all reputable research reports. Be especially wary when you hear statements like “a disturbing trend” or a “growing problem” that aren’t accompanied by any research data. What many of these reports fail to say is that victimization of children has been on a steady decline for years. Problems do exist including some horrendous stories about exploited and abused children, but as David Finkelhor pointed out in The Internet, Youth Safety and the Problem of “Juvenoia, “sex crimes overall and against children have dropped dramatically in the US” during the same period that Internet use has skyrocketed.

One size doesn’t fit all

I’m not saying that there aren’t kids who might benefit from filtering or monitoring. But not all kids do. And even if you feel you do need parental-control software or service, it’s important to remember that they are never a substitute for common sense, engaged parenting and — most important — teaching kids to be respectful of others, self-protective and resilient. Eventually your kids will grow up and one of the purposes of childhood is to learn to protect yourself long after mommy and daddy and whatever tools they employ are off the job.

Even though I knew it was completely false, it didn’t surprise me to hear the spokesperson for the monitoring app claim that 70% of kids had been cyberbullied. Though not all are guilty of this, it’s not uncommon to hear such exaggerations from companies (and some agencies and non-profits) in the Internet safety space.

While any case of cyberbullying is bad, the fact is that the statistics are nowhere near as dire.  The numbers vary a lot. The National Center for Educational Statistics reports that 6% of students in grades 6-12 experienced cyberbullying. The Centers for Disease Control found in 2011 that 16.2% of students had been bullied via email, chat rooms, instant messaging, websites or texting — compared to 20.1% who had been bullied on school property (traditional bullying) — during the 12 months prior to the survey. The Cyberbullying Research Center reports that “on average, about 24% of the students who have been a part of our last six studies have said they have been the victim of cyberbullying at some point in their lifetime.”

Dan Olweus, who the editor of the European Journal of Development Psychology referred to as the “father of bullying research” wrote a 2012 article for that journal where he said that “claims about cyberbullying made in the media and elsewhere are greatly exaggerated and have little empirical scientific support.” Based on a three-year survey of more than 440,000 U.S. children (between 3rd and 12th grade), 4.5% of kids had been cyberbullied compared to 17.6% from that same sample who had experienced traditional bullying.  An even more interesting statistic from that study is that only 2.8% of kids had bullied others.

Not all risk is created equal

Most experts agree with Olweus who defines bullying as “aggressive behavior that is intentional and that invoices an imbalance of power. Most often, it is repeated over time.” But clearly there are a range of behaviors that affect child ranging from mildly annoying to extremely severe. However we label them, we need to avoid assuming that every rude or mean act is extremely harmful.

There have also been a lot of false reports about the incidences of kids being sexually solicited online. During that recent pitch about the monitoring app, I was told that the woman’s own son encountered creeps online but — when I asked what happened — she said that he ignored them. It turns out that’s common. Unless kids are looking to hook up with strangers online, that’s exactly what most teens do. Parents can freak out all they want, but kids generally know how to avoid getting entangled in unwanted online relationships. And those few who do become victims typically meet the offender “expecting to engage in sexual activity,” according to a paper from the Crimes Against Children Research Center (CRCC).

The problem — as articulated by researchers — is that some kids take extraordinary risks and the kids who take risks online are the same ones that make bad decisions in their offline lives. As the Internet Safety Technical Task Force concluded, “Minors are not equally at risk online. Those who are most at risk often engage in risky behaviors and have difficulties in other parts of their lives. The psychosocial makeup of and family dynamics surrounding particular minors are better predictors of risk than the use of specific media or technologies.”

Whatever the numbers are, they’re still too high but they represent a small minority of kids which is why a one-size-fits-all approach, including monitoring and filtering, doesn’t make sense. If we’re going to serve the population that is at risk, we need to develop programs that provide serious intervention. An Internet filter or monitoring program could be part of the solution, but it’s only a small part.

There are a lot of reasons why exaggerating is bad. For one thing, it causes parents to worry unnecessarily. Of course parents are concerned about their kids use of online technology but focusing on the technology — instead of the child’s social emotional state — is likely to divert their attention from real issues. And, as Olweus pointed out in this paper, “It may also create feelings of powerlessness and helplessness in the face of the presumably ‘huge’ and ubiquitous cyberbullying problem.” Olweus is also concerned that fixating on cyberbullying could encourage “an unfortunate shift in the focus of anti-bullying work if digital bullying is seen as the key bullying problem in the schools.” He worries about funneling resources in the wrong direction, while “traditional bullying — which is clearly the most prevalent and most serious problem — would be correspondingly downgraded.”

I worry about something else. One of the best ways to counter negative behavior is to show that it’s not the norm. Exaggerating cyberbullying makes it look common — in some cases we’ve seen numbers that make it look as if the majority of kids are engaged in it. If it’s common it must be normal and if it’s normal — so goes the reasoning — it must be OK. Well, it’s not common, it’s not normal and it’s definitely not OK. Norms research from Professors H. Wesley Perkins and David Craig has shown that emphasizing that most kids don’t bully actually decreases bullying.

For more, scroll down to view the slide presentation, “Do fear and exaggeration increase risk?”

So, the next time someone tries to sell you software or a service to control or monitor your kids, ask yourself whether you really need it and if your kid will benefit from its use. If your kids are like most, chances are you won’t need it. But even if you do, use it with caution. Ultimately the best control mechanism are the ones that your child has internalized. And, since most of us live long past our 18th birthday, what’s important isn’t just how you’re able to control your kid as a child but how your child grows up to protect him or herself.  And the last time I checked, teaching self-respect, empathy, kindness, reslience and self-control was way beyond the scope of any of these products.

Roosevelt and Eisenhower said it well

In his famous 1960 speech, three days before leaving office, President Dwight D. Eisenhower warned Americans to beware of the military industrial complex. Although he was talking about armaments — not parental-control software — he nonetheless left us with a sobering yet optimistic thought. “Down the long lane of the history yet to be written America knows that this world of ours, ever growing smaller, must avoid becoming a community of dreadful fear and hate, and be instead, a proud confederation of mutual trust and respect.”

And of course who can forget Franklin Roosevelt’s words, “the only thing we have to fear is fear itself.”

It’s time for us to put aside the fear, respect our youth and model the types of behaviors that will help them learn to respect themselves and others.

Cyberbullying: a serious problem, but not an epidemic

Bullying still > cyberbullying, but most kids do neither

Challenging ‘Internet safety’ as a subject to be taught

Do fear and exaggeration increase risk? from Larry Magid
Tweet