Back in the days before deregulation, AT&T was nicknamed “Ma Bell.”  The new AT&T is no longer called that, but — at least when it comes to safety – it’s acting motherly towards teenaged drivers by encouraging them not to text while driving. The company just launched its It Can Wait campaign to get young drivers to pledge not to text while behind the wheel.

An AT&T survey found that 75% of teens say it’s “common” for their friends to text while driving but that can change. Smoking was once “common” as was failing to use a seat-belt, but social norms (along with laws) have changed that over time.

The dangers of texting and other activities that distract drivers are well documented.  Research, reported on the government site distraction.gov, found that ‘In 2010, 3,092 people were killed in crashes involving a distracted driver and an estimated additional 416,000 were injured in motor vehicle crashes involving a distracted driver.” A 2009 Car and Driver study found that texting is even more dangerous than drunk driving. It was based on a very limited sample, but comparisons to DUI aside, other studies have conclusively shown that texting while driving decreases reaction time and increases the risk of an accident.

What I like about the AT&T campaign is that it’s using social media to change social norms. The site links to a Facebook page where drivers can “take the pledge” not to text and drive. I took it and encouraged my Facebook friends to do likewise. 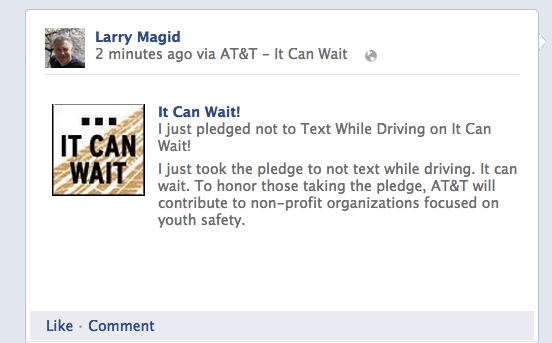 I took the pledge and posted it on Facebook

AT&T competitors, Verizon and Sprint, also caution their customers not to text while driving. Here’s Sprint’s “Focus on Driving” page. Verizon is conducting a “Don’t Text and Drive Pledge” in Ohio high schools and has done other educational work on the subject.