A recent story from the Gilroy Dispatch gives me concern about the unintended consequences of our recent campaigns to stop bullying. The report, which lacks specific details, quotes police officials referring to the children involved as “suspects”and “victims.” It reads more like a crime blotter than a serious discussion about how to encourage youth (and adults too) to treat each other respectfully.

I don’t have enough details to know whether law enforcement intervention was necessary in this case.  There certainly are situations where police do need to be involved. But I worry whether our well meaning desire to combat bullying could lead to an even bigger problem by branding children who misbehave as criminals instead of using other methods to create a more civil and compassionate environment for our children.

To be fair, most of the recently enacted state bullying laws don’t necessarily criminalize what we typically consider to be bullying. In an email, Cyberbullying Research Center co-director Justin Patchin said that “most simply mandate that schools have a policy” and “none say schools ‘must’ suspend for bullying.” He added that “it is up to the school administrator to determine what school-based discipline is appropriate and if the police do get involved they will decide whether the facts of the case warrant an arrest for a criminal offense. The applicable criminal laws really haven’t changed in most states.”

Nancy Willard, director of Embrace Civility in the Digital Age and author of several books on cyberbullying agrees that there are some “instances of egregious cyberbullying that should be viewed as a criminal offense,” but said that while’s it’s important to hold those who cause harm accountable, “punitive responses to these kinds of situations, either suspensions or criminal action, should be discouraged.” She encourages a “full investigation to accurately assess the underlying factors, leading to a restoration that will allow all of the students involved to move past this situation to remain welcomed and successful members of the school community.”

There is no direct evidence that being suspended for bullying increases a child’s odds of getting into the criminal justice system but there have been studies to suggest that harsh school discipline can lead youth into what some federal officials are calling the “school-to-prison pipeline.”

The U.S. Department of Education and the Justice Department, in 2011, launched theSupportive School Discipline Initiative “to reduce the use of disciplinary practices such as suspension and expulsion, which place children at higher risk of poor academic achievement and dropout, illegal behavior, and entry into the justice system.”  Secretary of Education Arne Duncan expressed concern about “rising rates and disparities in discipline in our nation’s schools” and pointed to a study that found that found that when a student was suspended or expelled “the odds increase dramatically that they will repeat a grade, drop out, or become involved in the juvenile justice system.”

Patti Agatston, a trainer and consultant to the Olweus Bullying Prevention Program and co-author of Cyber Bullying: Bullying in the Digital Age said that “most law enforcement personnel would rather address bullying and cyber bullying through prevention and education.” She feels that “giving a criminal record to a child at a young age will likely do more harm than good for the perpetrator” and said that “there are more supportive and effective ways to help the targeted individual without involving the criminal justice system.”

Bullying on the decline

I am also concerned about the general sense that bullying is a growing problem.  While it is a problem — regardless of how often it happens — the actual incidences of bullying are going down, not up, according to researchers at the University of New Hampshire’s Crimes Against Children Research Center (CRCC).

A recent paper by CRCC’s director David Finklehor looked at several studies and found “substantial declines in face‐to‐face bullying and peer related victimizations at school from the 1990s to recent years.” The annual National Crime Victimization Survey, according to Finkelhor, “shows that between 1992 and 2010 for youth 12‐18 school related violent victimizations declined 74%  and school related thefts declined 82%.

The 2011 Health and Risk Behaviors of Massachusetts Youth report, based on a survey of 8,925 students in 137 Massachusetts secondary schools showed a significant decrease in reported “bullying at school” between 2003 and 2011.

Percentage of  Massachusetts secondary students reporting that they had been bullied in school.  (source: Massachusetts Youth Risk Survey) 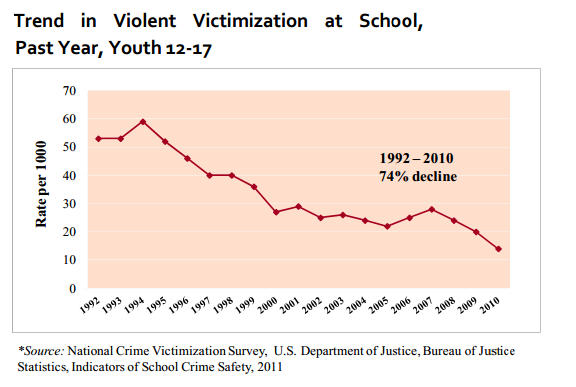 The Center’s on Youth Internet Safety Survey (YISS) did show that cyberbuling rates increased from 6% in 2000 to 9% in 2005 to 11% in 2010, but that is also the period when millions of children started going online. Prior to the advent of online communications, the cyberbullying rate was zero. ”The increase in online harassment,” wrote  Finkelhor, “is probably best seen simply as growth in the usage of electronic media for all kinds of socialization including its negative forms.”